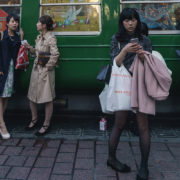 I was traveling to Cuba having this strong intention in mind not to take pictures of road cruisers. This did last for like two hours. There are so many old vehicles determining the streetscapes and being quite impressive. The minority are originals, spare parts are not available because of the American Embargo so that people are dependent on their car repairing skills. Most of the vehicles are pimped by Russian spare parts no matter if we talk about rims, engines or interior designs. Lada car dashboards are not rare. Furthermore Russian vehicles or some old German cars from the eastern production are also easy to find in the appearance of the streets.

So what to do with the shots that I normally did not intent to take? Well, I will show you – Have fun and enjoy browsing.

In the mid of January I had the pleasure to go to the remarkable but outstanding Republic of Cuba for two and a half weeks. Just talking about my arrival I could have written an own blog post about plastic bag tourists, slapstick at the baggage claim or the art of renting a car. Cuba has to offer a bunch of sights and it is not that complicated to travel through the country as it used to be a few years ago.
Nearly everywhere you will find available private accommodations so called “Casa particular“ being comparable to AirBnB just without wifi connection. While driving you can see blue signs at doors indicating that rooms are available. The travel route was limited to the western part of the island: Matanzas – Santa Clara – Trinidad – Cienfuegos – Schweinebucht – Havanna – Viñales – Varadero.

Matanzas was a great start to begin my journey, a calm city with hardly tourism. The best way to enjoy the first days. The mojito is less expensive and you see more locals than tourists on the streets and in the bars. You get used really fast to at noon-served ron so that one week of recap is waiting for you back home.
Santa Clara is a city with good vibrations and the city where the omnipresent Che Guevara is buried.

Trinidad has a beautiful architecture. In my opinion it was kind of too touristic as you will find people attracting tourists for certain restaurants or offering taxis. Nevertheless it is the idle location to start nice tours to the natural part of the island. The Bahía de Cochinos has become famous by the CIA-attack in the 1960s that was defended successfully by the Cubans and that also had a huge impact on the current socialistic influence. Besides all the problems of the last decades of under supply of the population that is probably mainly caused by the strict embargo of the US, Cubans are still proud of their socialism. Traveling through the country as a capitalistic-influenced European the question came up in my mind if it is ok to possess and own more than we really actually need? Inhabitants of Cuba seem to be happy, like to share and enjoy life with you.
I admit, this is probably too much social romantic because you should always keep in mind that after the collapse of the Sowjetunion people suffered under hunger. Also in Cuba people would like to have an iPhone, sunglasses by Ray Ban, a car or strawberries in December.

The Bahía de Cochinos is perfect for snorkeling and resting and is also offering accommodations at the beach.
Havanna needs to be discovered by food. Three days are the right amount to spend. The first day I felt kind of disgusted. Trash, bad smell, crowded areas, old houses, art-deco ruins and lots of constructions with signages of western construction companies. Havanna is being remodeled and it seems like that in three to four years the flair and impressions of old Havanna (already hard to find) will be gone. It is the city with the most recognizable western influence. Lucky me I could find impressive districts way off from the touristic areas. Nevertheless I overpowered myself to do a traditional but way too expensive car ride in an antique Belair Cabrio when I also was surprised by a tropical rainstorm.
Everyone was enthuse about Viñales. Ok, since I have been there I can not agree with this enthusiasm. The city is totally focussed on tourism offering restaurants, accommodations and tour operators. Every morning one could observe crowds of tourists waiting at the beach to get guided tours like riding on a horse to a tobacco farm or guided hiking tours to improved paths. Walking these paths on your own it is kind of funny to know that people seriously spend money on these guided tours although they are easy to access from the village. Once you have escaped the tourist crowds and you have arrived in the nature it starts getting nice.
The last two days I have spent in Varadero being a paradise for arranged vacation packages in Cuba. It was kind of hard to find a private accommodation as most of them were occupied. But people were so friendly that they helped looking for a room by calling other locals until a room was found. Varadero is not that bad how described in touristic guidelines. Beaches are fantastic and not crowded at all. At lunch-time people are showing up sober from their last nights to get tanned, most of them speak Russian.

That is how I experienced Cuba, relaxed, lots of nice people and by avoiding the touristic areas you will find a beautiful impressive country with a lot of paradoxes.
Today you will find an overview which will be followed by a next blog post referring to the Cuban cars and including an artistic perspective of the beach in Varadero.
For the gearheads among of you: I have found my perfect traveling camera, Sony A7RII with 28/2, 24-70/4 and Voigtländer of 15mm.